I have not had this much excitement over a discovery of a new band since my friend dragged me to see the Japanese Punk band Peelander-Z who bill themselves as a “Japanese Action Comic Punk band hailing from the Z area of Planet Peelander”. Each member is dressed in a Power Rangers style costumes with hard plastic colored wigs to match and name themselves after each color: Peelander Blue, red and Yellow. They have one of the craziest and funniest stage acts and songs. I’ll have to right about them another time. Look them up on YouTube although you have to see them live to really appreciate them. It’s like watching rocky Horror on television instead of the movie theater or worse: listening to the soundtrack without ever seeing the movie at all.

This article is about my latest discovery. It’s about the controversial Afghan all girl pop punk trio called the Blue Burka Band.

The band had a short career in 2003 because in Afghanistan music and dancing was forbidden under the Taliban rule. Afghanistan still considers girls playing music and singing as even more of a disgrace.

These three girls draped in their blue burkas blare their rebellious and hilarious songs like pros. Their style has been compared to the 1980’s band Bananarama. They do the standard simple steps, microphone and guitars swinging but between the satirical and political lyrics and pop punk music they are not just your average girl band. Oh yeah, let’s not forget the burkas that not only make a political statement, show their sense of humor and mystery but hide them from their audience, the media and their potential oppressors and enemies.

They sing songs making fun of the Afghanistan oppressors and the burkas them selves. Their biggest hit is a song called Blue Burka with lyrics like “You give me all your love, you give me all your kisses, and then you touch my burka, and don’t know who it is…”

anonymity in public, the Blue Burka Band stay under their burkas hide their identity from the authorities of Afghanistan. Their very existence was and stil can be dangerous on multiple levels. The were breaking “laws” by being women singing in a band, making fun of the ruling class, wearing the burkas to mock the oppression of women in Afghanistan.

They recorded their single in Germany in 2003 and played shows in Europe when they could. Despite 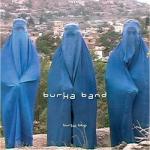 the changes in the following years they still won’t play in Afghanistan and are pretty much staying underground waiting for the right time to emerge again. According to the singer to this day there are only 10 people in Afghanistan that know their real identity.

Unfortunately the only way to see their video these days is on YouTube. One day they hope to get back on the road and record. I can’t wait. I hope they grace the stages of the United States or I might have to break down and get a passport.

Do You Love Me? Really Love Me?

Do you ever wonder what your “image” is t other people? I do. Do you ever wonder how they perceive you? I do. I’ve spent a good part of my life figuring out how to get people to like me or love me. It worked. They at least appeared to like me. Not always n the ways I wanted them to. I hit a point a while ago where I stopped caring. Not entirely, but enough to focus on my dreams and loves.

People tend to have an image of themselves that they present and another side to them that they don’t present to others. They way they talk about themselves and dress and walk and even look at you is one side but is it really who they are and how they feel about themselves? It is really easy these days to create an image of yourself with the internet using social networking sites, webs sites and blogging sites. You can take your time in choosing what photographs you want to present, what you say, and who you associate with. So, I wonder sometimes what my image is to others: people that know me personally and people that only see what I present on the internet.

I’ve tried to maintain a high level of honesty when writing or speaking with others while still trying to get them to like me. Now I just try and be true to myself and honest when I write. Sometimes I censor myself so I don’t offend anyone but most of the time I let people see the real Rich and what’s really going on.

I’m not ashamed of my defects of character, my emotional problems, my sexuality, my spirituality or even the way I look. Of course I get down on myself sometimes and feel good about myself other times. That’s human. Don’t you do the same thing?

I’ve done some weird, strange, perverted and even self-destructive things in the past and I am not ashamed. Maybe I get embarrassed sometimes about my actions or thoughts but never ashamed. I’ve come to grips that I am what am. Still there’s a lingering curiosity as to what you think about me, honestly.

What do you think of me? What is my “image” to you? Do you love me? Really love me? I love you.

In the eaves amongst the dust and debris clutter of days gone by in a house long abandoned she sits spinning her web of lies and deceit, a silken thread drawing in any who venture near shadow her only companion. This creature once of beauty divine hair a curtain of gold multi faceted shades of the sun parts golden and bronze glitter and shine, eyes the color of a noon day sun body lithe and graceful that of a dancer a high-wire queen skin of palest white lips full and red not blood red no that would be overdone but the color of roses in the height of bloom lush and full capable of fulfilling any demand. This creature fallen from grace alone in this forgotten place, spinning her web in the hopes that one day the memory of what she once was will rise again in the minds of men both young and old. She sits both withered and alone her hair once shining and gold now a veil of grime and mold, skin once taut and supple once  soft and pure now the gray of a forgotten day wrinkled and  and worn, eyes the color of a noon day sun now watered and rimmed in red clouded as if already amongst the dead, lips once full and sure now drawn back blackened in a rictus grin. Time……….