“Just when I thought I was out…they pull me back in.” Michael Corleone Godfather III

The following response was posted about my poster (above) for an upcoming event I posted.

A fairly famous author and filmmaker about serial killers said “I would argue the poster is moronic. A lot of us, including myself as a true crime author, are here “in the business” of profiting from people’s fascination with serial killers, but few of us forget that in the final analysis there are victims and families whose lives are destroyed by the acts that serial killers perpetrate. Unless there is some forensic reason, I de-identify victim photos by blurring out their faces, an act akin to covering the victim. A poster like this exploits and glamourizes the suffering of victims and worse, trivializes it. Somebody should hang the moron who designed that poster in his/her own blood, along with the idiot model who agreed to pose with her titties soaked in fake blood in this poster. Everyone thinks serial killers are cool until they come over and anal rape you or your kids and cover them in their own blood.”

I wrote 3 responses already but decided to let you write the responses instead. I can’t post this on Facebook (see previous blog)

Here’s the original poster that I like better anyway. 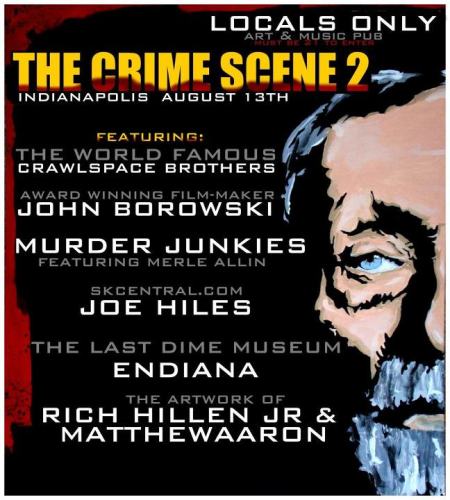 Pornography, Grandpop and Me


I was 8 or 9 years old when I was first exposed to pornography. Sort of. I didn’t know I was exposed. I lived with Grandmom and Grandpop at the time the real deal Grandparents that copulated a few times- at least 3 times to produce my uncle, my aunt and my paranoid schizophrenic mother. I won the genetic lottery with the mental illness, heart problems, trigeminal neuralgia and my addictive persona. Who knew back then? They were barely treating my mother correctly. How could anyone know I was to become the crazy man boy I am today, maybe tomorrow and certainly yesterday? Too many yesterdays if you ask me or if you don’t ask me. Luckily, I have a disassociate disorder or the good fortune to file them away until needed or they leak out into my other problems depending what’s going on. This has nothing and probably everything to do with my natural consumption and once obsessive passion of pornography.

Grandpop took me on errands a lot from what I remember. We’d stop at a bar and I’d wait in the car while he had a few drinks. I didn’t notice what kind of bars at the time but they were what they used to call Go Go Bars. I just remember seeing the words dancers and go go. Sometimes Gramps would take me into regular bars and we’d sit on the stools and I drank soda pop and he drank beer. I didn’t like the smell and the taste was even worse the few times he let me try it at home. Grandpop didn’t exhibit the signs of an alcoholic the way I’ve learned what one was by becoming one and then stopping and hanging out with ex-problem drinkers as some but not all call themselves and sometimes others. Mostly, they/we speak in the first person when sharing experiences, strengths and hopes at gatherings of ex-drinkers. I remember Grandpop seemed to drink beer everyday but he loved it as much as he loved mixed nuts, sharp cheddar cheese and Grandmom’s chicken dumplings. Who doesn’t love Grandmom’s chicken dumplings? I didn’t like sharp cheddar cheese, mixed nuts or beer as a kid. I loved her chicken dumplings. What’s this got to do with porn? I’m not sure but I’ll get back to it.

As he got older he had heart problems like I inherited. He had all kinds of heart surgery so the other memories lessoned. He didn’t stop at the buildings that I had to wait for him in the car. He no longer ate high salt products and drank less beer. He’s sneak sharp cheese, nuts and an extra beer when he could but Grandmom had a close watch on it. Now Grandmom I was told years later had the real drinking problem. She was always drinking mixed drinks and cocktails so I never paid attention since it was in a glass. She was getting drunk right under my nose.

I left them when I was 11 years old to become a ward under the legal guardianship of my fourth and fifth grade teacher and her husband. My second or is it third parents (?) were taking on an 11-year-old addict; mental case and none of us had any idea yet. It was agreed that it was best for me to go under their care because they could provide the stability and financial support I needed or at least provide a little more than my Grandparents were capable of at the time.. Even my “crazy” mother gave her consent. I had no idea what was to come and neither did they.

I kept in touch with my genetic family. of course, except dad who took off after mom started to go nuts. As an unstable adult I understand. Wouldn’t you? As I approached my teen years Grandpop opened up more and exposed himself to me. Not his penis but his dirty sexual side. He told me dirty jokes and taught me new words referring to women’s body parts. My uncle told me some of the comments he made with him browsing through porno magazines on occasion like “Her clit so big I could drive a truck through it.” Looking back it actually made no sense. I guess Gramps didn’t know what the clitoris was except it was on a woman and rhymed with Dolores.

At least I know where my perverted side came from. I got a lot of great things from the G-parents too. I don’t mean to sound like they were horrible people or anything. They loved me and I got my corny sense of humor, charm and social skills from Grandpop and my sense of good manners and when and how to be polite from Grandmom. They also exercised unconditional love in between the guilt trips. That’s not the point. Grandpop and uncles and other people I attracted were perverts like I was becoming. Well, not perverts but I was exposed to the elements that create an objectification of women and exploitive nature concerning sex in general at an early age and carried, developed and refined it into adulthood.

I found books of sex stories and a couple magazines of my new dad’s when I hit the age of “discovering yourself as a man” I call it. The stories were graphic but the magazines weren’t too graphic. I was sick and took off from school one day with my new mom and we went to the doctor then stopped at a 7-11 afterwards to get a Slurpee or something. As I threw away some trash I peeked in the trash can and saw a magazine. It was a thick magazine with photographs of real people having real sex. I wanted that magazine so I took it. My new mom decided to let me have it and gave me my first sex talk. Her 2 rule theory that applied to having porn and having sex. – 1. Be discreet and 2. Protect yourself. It’s tough to be discreet as a teenager and it was tough as an adult for me to be discreet but I always protected myself. So I was on my road to sexual exploration. I slowly built my own collection and developed my tastes in what I like and that became a lot.

When I was 15 or so I decided to buy my Grandpop birthday gifts he would really love and use- A 6 pack of Budweiser bottles and the latest issue of Hustler magazine. I actually got my new parents to buy the beer and I think I bought the Hustler. I looked older for a teen because I was tall and had facial hair. I was getting served alcohol when I was 16 and 17 years old and cigarettes since I started smoking at 14. I also bought my Grandpop a funny card about getting old. Grandmom was in shock when she saw him pull the Hustler out of the wrapping. Grandpop was embarrassed to see it. I think they thought that their 15-year-old Grandson buying beer for him was bad enough but a porn mag as a birthday gift from your 15-year-old Grandson was much worse. My mind didn’t learn the difference in that rule of discretion my 2nd Mother instilled in me yet. I didn’t master it until I was well into my 30s. Luckily, I “protected myself” as 2nd Mom advised.