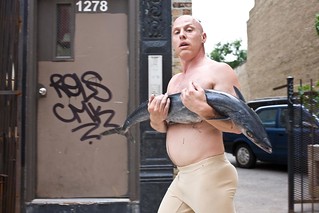 “She just doesn’t know it yet.” He’d say right after.

I’m on a mailing list of a few “pick up artists” sites. I subscribed a long time ago when I thought I needed help meeting women. Well, maybe I did. I just didn’t practice their principles in all of my affairs. Ha. I did need help at times but they didn’t always have the answers. I even read a book called the Game which was more of a good read than a “how to” guide. It was the author’s story of how he got involved at first as research to write a book and he got sucked into the “pick up” scene. Remember that show that ran briefly on VH1, The Pick Up Artist? Mystery, the star of the show was also the central character in the book.  The book takes in the human factors despite the fact that they call it a “game” and the “pick up artists” play these games. The nature of men and women are different and our needs and wants are different. Deep down we are no different than primitive man. We’ve been conditioned to act accordingly to what our society dictates and dating, relationships and sex have become more obscure and difficult as far as communications go. Obviously, my initial interest in the subject wasn’t to learn human behavior but I am interested in that too.

Personally, I’ve been highly successful at times with the opposite sex at times and I’ve had rough patches other times It always depends on my own self worth and self-esteem. When I was young man my self-esteem was based on how much a woman liked me. I had this idealized concept that if all women didn’t think I was attractive then I was no one. I was a loser. I grew out of that theory but still had spurts of low self-esteem. Maybe I still do. I just don’t care as much these days.

I still receive these emails from various “pick up” sites with articles and then they want me to buy something. Sometimes I delete them without reading them sometimes I read them if the subject is catchy. Ha. Catchy. That’s what caught my eye the other day. The subject read “Are You a ‘Catch’ to Women?” I wanted to find out and I opened the email. It was interesting. They defined a “catch” as a “high status” male. A high status male is a man that has his shit together and has many qualities that women desire. Of course that varies depending on the woman.  I sat down and thought about it. I wonder if I am a “catch” to women.

Over all I have to say that I am a “catch”. Not to all women like I fantasized as a young man but in some women’s eyes. More importantly I am a “catch” in my eyes. I can look in the mirror on most days and think or even say out loud “you’re alright, Richy boy.”  Or something like that. Ha. Not to sound conceited or cocky but I do like myself today. I like the way I look, dress, act, and feel on most God given days.

I feel uncomfortable writing it like this for several reasons. First of all it might ruin my “self loathing” image that I seem to portray in my writing and spoken word. When I write about my spiritual or mental sufferings they are true human experiences that are only a small part of me. They are not the entire make up of Rich Hillen Jr. I tend to feel more motivated to write when I’m in a bad mood, upset about something or depressed than when I’m happy and confident. Second, I don’t want to come off as cocky. There’s a huge difference between being cocky and being confident yet there is a thin line between them. I don’t think I’m better than anyone. I’m simply aware of my strengths and weaknesses and feel confident most of the time. Also, feel slightly embarrassed to be reading articles from the so-called “pick up artists”. Who wants to admit that? That is one of my strengths and weaknesses. I am honest with what’s on my mind at least when I know what’s going on.

Hopefully, I’ll be the “catch of the day” for you today if not “there’s plenty of fish in the sea”

This entry was posted on Saturday, September 22nd, 2012 at 3:13 pm and is filed under America, Anti-Social, Bipolar Disorder, Blog, Dating, Depression, Fate, Heart, Love, Prose, Rich Hillen Jr. You can follow any responses to this entry through the RSS 2.0 feed. You can leave a response, or trackback from your own site.