I wasn’t going to write about him but I saw something the last week that I thought was interesting. Ryan Dunn died last Monday and apparently there are a lot of loyal fans of his and of the Jackass tv show and movies he’s been major part of. I think most people have heard about it by now. At least in my neck of the woods. I even ran into him once at the North Star Bar in Philly at a Hank Williams III show. My girlfriend at the time was creaming her jeans because she had a major crush on him. I’ve been a fan at a distant. I’ve seen all of the CKY videos Bam Margera made previous to Jackass. I’ve seen every episode of Jackass and the movies. I watched most of the Viva La Bam series until it got redundant.

I always admired the east coast and west coast crew of Jackass. They were doing what I couldn’t do. I wouldn’t do. I wanted to do. There was also a total trust and friendship that I admired. I never had that with friends growing up. Sure I did some mischief and drank way too much but it wasn’t the same.

Ryan Dunn stood out from the rest with his commitment to do anything for entertainment and his laid back personality. He’s been hurt many times. I’m sure he’s been near death many times in his 34 years of life.

I made the comment yesterday that it was too bad they didn’t get it on film. I meant no disrespect. If I was Ryan and well known for my wild stunts, partying and fast driving I wish it was on film if I died a tragic death while speeding possibly drunk and crashing my Porsche. Just seems right.

Roger Ebert was jumped on for saying “friends don’t let jackasses drive drunk.” He pissed off a lot of people and apologized the next day but wouldn’t retract the statement. He stood by it. It was meant to be serious and funny. I think he is right. How many distasteful jokes have we all made including the Jackass crew through the years.

I’ve been to many funerals in my life and I’ve joked and heard jokes about the deceased. We laughed because it’s part of therapy for some of us. It’s also the style of our humor. I joked about flushing my grandpop’s ashes down the toilet because that’s what he would have told us to do.  Would imagine that Ryan’s friends would make jokes too. Ryan was known for his sense of humor, dangerous stunts and partying. Roger Ebert is a bit of a jackass in my opinion but he said what he said and its just words.

The other thing I heard about were the number of people visiting the scene of the accident. There are a lot of people scavenging the scene taking parts of Ryan’s car to sell on Ebay. It was presented like it was a big deal and no one has done it before. It has been done before.

For years crime scenes and related items of famous and infamous people have been gathered, bought and sold. I personally have owned a piece of serial killer Ed Gein’s house, dirt from his grave and a piece of his grave stone. There used to be a lot of things like this sold on Ebay and I was just as guilty. I wonder who is sicker the one who makes a profit for it or the one that buys it. I’ve done both and don’t feel bad about it. I might not like it if it was my family that died that people are collecting and selling but it has become part of our culture and has been for years.

I still throw out a big RIP for Ryan Dunn and prayers go out to his friends and family. 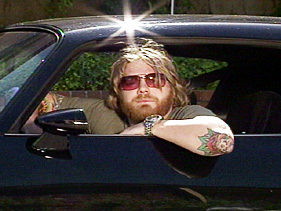 This entry was posted on Monday, June 27th, 2011 at 6:16 pm and is filed under Art, Article, Bands, Blog, Cigarettes, City, Coffee, Dating, Death, Depression, Drugs, fear, Friends, Love, Nudity, Outsider. You can follow any responses to this entry through the RSS 2.0 feed. You can leave a response, or trackback from your own site.

One Response to Dunn is Dead